Blog
You are here: Home1 / Blog2 / DIY Projects3 / Everything You Need to Know about Making a DIY Piñata

A piñata is usually shaped like a donkey or other animal and is traditionally made from a clay pot, paper mâché, color tissue. A piñata is filled with candy, small toys or fruit.  Piñatas are sometimes shaped like a seven-pointed star, cartoon character or superhero.

A DIY piñata lets you use your imagination to create a party favor to entertain all your guests. The piñata dispenses treats or gifts when the guest of honor breaks the paper mâché or cardboard decoration. Use a stick or small bat to break the piñata.

History of the Piñata

We know that piñatas are a part of Spanish and Mexican culture, but the Chinese smashed large, stuffed paper ornaments shaped like animals as early as the 13th Century. The Chinese burned the remainder of the paper ornaments and thought the ashes were a sign of good luck.

Marco Polo saw these paper ornaments on one of his trips to China and brought them back to Italy, where the decorations were adapted for use in pre-Lenten festivities. Explores then brought the hanging paper ornaments to Spain, and then across the Atlantic to Mexico.

How to Use a Piñata

Piñatas are suspended from the ceiling by a rope, and guests take turns hitting the piñata. Guests are usually blindfolded as they hit the piñata, and someone may spin the piñata or move it to make it harder for the blindfolded person to hit it.

After a guest (or the person celebrating a birthday) breaks the piñata, everyone scrambles to retrieve the treats or toys.

Should You Buy a Piñata or Make One?

You can buy a piñata online or from a party store. (Piñatas cost up to $50 if you buy them from a website or chain store.) Save money and create something unique for your friend or family member’s birthday with a DIY piñata. You can make a piñata with items you probably have around the house.

Experienced crafters will have an easier time making a piñata than novices, but the process isn’t complicated. Piñata-making takes a bit of patience, but you’ll have a unique party favor when you’re finished.

How to Make A Donut Piñata

Some piñatas aren’t shaped like unicorns, horses or donkeys. A do-it-yourselfer’s imagination is the limit for homemade piñatas. Follow these steps to make a donut-shaped piñata:

Get several different colors of crepe paper and cut some fringe. You’ll need one color for the donut, a few colors for the sprinkles, and one for the frosting. Gather some cardboard, twine, masking tape, scissors, and white craft glue.

Use a large circular object to trace for the outside of the donut. Trace the inside by using a bowl. The exterior of the circle should be about 30 inches wide, and the inner circle about eight inches wide.

Cut out two circular donut shapes, along with a few strips six inches or wider for the sides. Tape one of the pieces along the inside of one of the shapes. Bend the cardboard, so it curves, and it’s easier to do this before you apply the tape.

Repeat the cutting and tapping for the outer donut circle. Don’t put tape on one piece of the outer ring so you’ll be able to fill the piñata with treats later. Poke a hole to add string or twine. Tape the second donut shape to the first using the same steps.

Use two or more sheets of crepe paper and crepe paper streamers to cut fringe for the piñata. Wrap the fringe you’ve cut around the piñata. Start at the inside of the piece and wrap around it. The inner circle is smaller than the outer one so that the fringe will overlap several times.

Keep wrapping until you get to the last bit of fringe. Bend the fringe to get to the cardboard and glue the final piece.

Add treats or small toys to the open flap of the outer circle; then close it and hang the piñata from the ceiling of your party area.

How to Make a Seven-Pointed Balloon Piñata 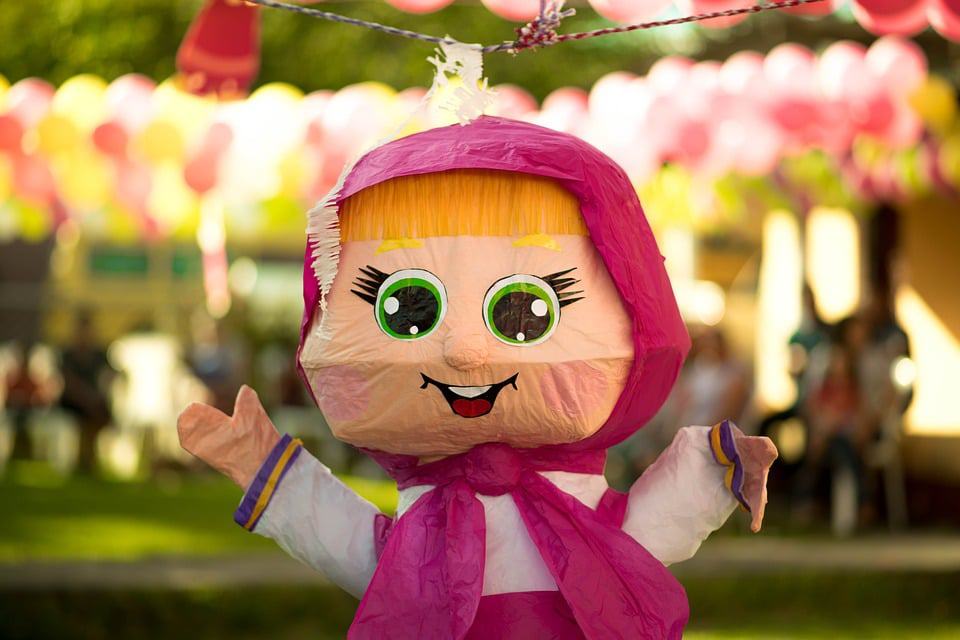 The traditional seven-pointed piñata is used at Cinco de Mayo celebrations and other Mexican festivities. Here’s how to make your own version of the classic party favor from South of the Border.

Use paper mâché to create the piñata core. Blow up the balloon and tie it with a knot. Remove the rubber band off the other side and put tape over the overhanging part. Make the paper mâché by combining one part water to one part flour. Three cups of water and three cups of flour should be enough for this project.

The paper mâché paste should be thick because it needs to bind the newspaper strips. Soak the newspaper in the glue and take off the extra paste before you put the pieces on the balloon.

Tie the twine to the end of the balloon, and add most of the newspaper strips while the balloon is hanging from the ceiling. Overlap the pieces as you add them. Let the first layer dry before adding a second and thirds layer of newspaper. Let the strips dry entirely overnight before going on to the next step.

Create cones (the points on the star) to connect to the piñata while the centerpiece is drying. You can order them pre-made or use cone-shaped cardboard to make an open-ended cone. Form a cone shape and tape the edges if you decide to make your own “star points.”

Now poke a hole in the balloon. Place a cone over the hole in the deflated balloon and a trace a circle around it. Cut a hole inside the traced circle with scissors, but leave one side intact.  Reach inside and take out the balloon, and shake out the excess, dried paste.

Use a utility knife to poke a hole opposite the opening. Take the end of a rope and tie it into a double knot and tread it through the hole. Now fill the piñata with candy or other treats. Close and tape the hole.

Cut a few quarter-inch tabs into the cone bottom. Fold the cone in and glue it to the piñata. Tape the cone to make sure it stays attached, if necessary. Hang the piñata and add the rest of the cones using the same method.

Cut the two inch and inch and a half strips of crepe paper three-quarters of the way into one-quarter inch wide fringe. Cut the pieces while they’re folded. Put a thin line of glue on the paper fringe.

Wrap fringe around the piñata base. The fringe should face downward. Make sure fringe overlaps as you wrap new layers. Cut fringe, so it doesn’t fall on the cones. Use small strips of fringe to cover cones once the piñata base is covered. Trim and cover any unkempt areas. Now you’re ready to hang the piñata for fun and games. 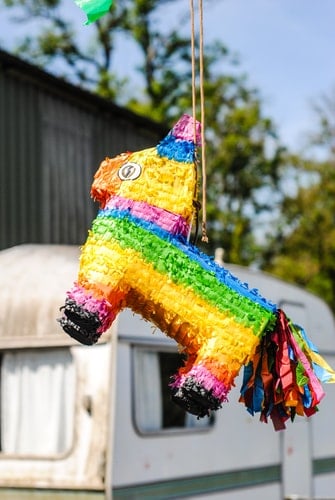 You can make your piñatas in just about any shape you desire. There are online tutorials for piñatas shaped like hearts, hair spray containers, blow dryers, pineapples, cake slices, diamond rings, and the ever-popular unicorn or horse-shaped piñatas.

You can turn a donkey piñata into a unicorn piñata with a few materials and a bit of ingenuity. Start with a homemade or store-bought donkey piñata and remove external decorations. Trim the donkey ears, so they’re smaller, and then spray paint the figure white. Now you have a blank slate to turn into a unicorn.

Use cardstock, several colors of cellophane and crepe paper, and make a colorful cone to use as the unicorn’s horn. Fashion the mane out of cardstock and add bright color fringe to complement the otherwise white body.

Several do-it-yourself piñatas require you to outline the donkey or other animal or object on a piece of cardboard, cut out the separate parts and attach them with tape or glue before adding fringe and filling the inside with treats.

Let your imagination be your guide as you make piñatas suitable for themed-parties and your friends’ (or family members’) interests and personalities.

How to Make Your Own Slip and Slide Kickball Field

Have You Ever Tried These Awesome Water Sports?
Scroll to top