Blog
You are here: Home1 / Blog2 / Outdoors3 / How to Make Your Own Slip and Slide Kickball Field 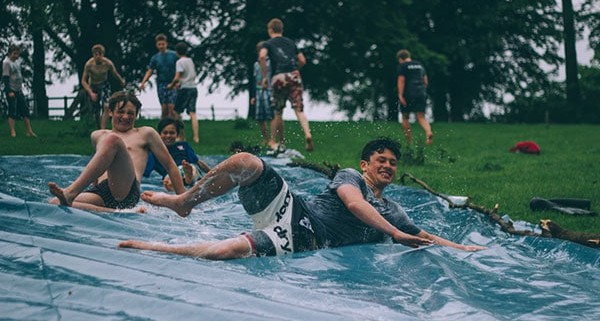 Slip and slide games are a great Summer water activity, as is kickball. Both are great ways to have fun in the sun. But they can get boring. So why not combine them? Slip and slide kickball provides competition and teamwork while also cooling the players down in the summer heat.

How to Make Your Own Slip and Slide Kickball Field

Slip and slides are a great summer water activity. People of all ages enjoy the feeling of sliding fast across their lawn.

Not only that, but many throw their own small slip and slide races with their friends.

Kickball is a favorite outdoor game that kids and adults both enjoy playing. It teaches teamwork, agility, speed, and coordination. More importantly, you can have fun playing it while still being competitive.

Kickball is such a favorite game that there are teams that compete against each other.

Kickball is a fun game and slip and slides bring joy. But why not make them both a little more interesting?

Slip and slide kickball is just kickball with a twist. All you do is play a typical game of kickball but use slip and slide as baselines and kiddie pools as bases.

With this game, you can enjoy two great summer activities in one! A game like slip and slide kickball is the perfect pass time to play with your friends during the warmer seasons of the year.

The History of Kickball

Kickball, also known as kick baseball, is about a century old and invented by Nicholas C. Seuss in 1917. He developed it to teach his kids how to play baseball. Seuss did not have any baseball equipment. So he opted for a ball to kick with feet instead. He referred to it as kick baseball.

Children mostly play it, but during World War II, soldiers would play it to keep themselves entertained.

The game lost popularity until the late 90s. Since then, adults are playing kickball more than children. The World Adult Kickball Association (WAKA Kickball) formed in 2011 in Washington D.C.  Now, there are 2,000 teams and more than 40,000 players that take part every year in the competition. 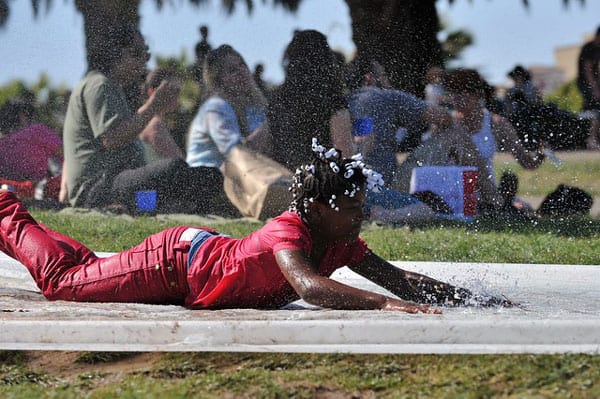 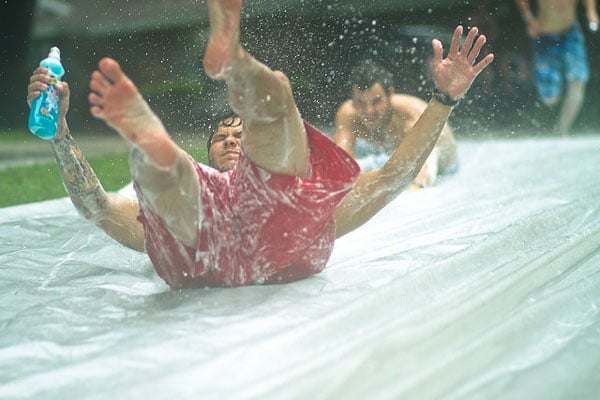 Slip and slide kickball is an easy game to understand. If you know the rules to kickball, then you are set. If not, here’s what you need to know to play.

Start by creating two teams. Next, choose one member from each side to be the pitcher. Then divide the rest of the members into other roles. Here are some different roles for the game:

The teams will then decide who will kick first.

The team that is kicking first will send a player up to Homeplate. The pitcher will roll the ball without the ball bouncing, and the kicker will try to kick it. If it goes past the pitcher’s mound without getting caught, they will run to the first base kiddie pool.

The goal is to get to the first kiddie pool (base) before getting tagged.

If concerned about falling and injuring yourself, you can run alongside the slip and slide then hop on and slip at the end.

Others often run on the wet sheets from the start which is more difficult when you are trying to reach the base because you will slip too much, but it is more fun this way.

The main point of the game is simple; one team needs to have more runs than the other.

To achieve this, players will kick the ball and run to all the bases to score points. When not kicking, the opposing team will try to stop players from scoring by catching the ball or striking the kicker out.

To build a slip-n-slide kickball field, you will need supplies to get it set up. It is a cheap project; you will not need to spend much. In fact, there is a good chance some of the supplies required can be around your house. Here is what you will need:

To begin building your slip and slide kickball field, you must first lay out the plastic drop cloths in the shape of a baseball diamond. These will serve as your baselines and will work best if laid on the flat ground.

If you are using real slip and slide mats, be sure to hammer them I with the stakes that came with them.

At home base, create a fair-sized gap between the tarps. With this space, players can kick the ball without slipping on the soap and water.

Once the tarps are laid out, you must place a kiddie pool at each corner of the diamond. These will be your bases. If worried about sliding on the rough ground, you can make the game safer by placing cardboard under the tarps for a smoother slide without any injuries. 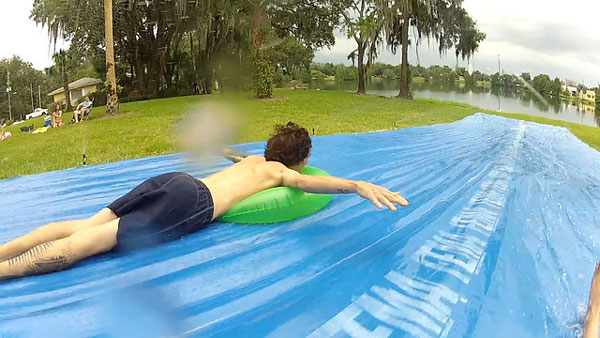 Nail down the slip and slide

All you have to do is nail down the plastic drop cloths with the tarp stakes. To be sure that the tarps are secure, be sure to nail them down deep into the ground.

Check the stakes every once in a while to make sure they do not come above the surface. If this happens, it could cause injuries if any players happen to fall on one by accident.

The final step in building a field is to add soap and water. Fill each kiddie pool; a lot of water will splash out during the game. Then add the dish soap to the baselines and rub it in to make them slippery.

If you wish to make the field more realistic, then you can spray paint the home plate and the pitchers’ mound.

Creating a slip and slide kickball field is simple, comfortable, and cheap.

Now all you need to do is lay down some plastic drop cloths in the shape of a diamond, nail them to that ground, and place kiddie pools at each corner of the diamond.

Fill the small pools with water and lather the plastic drop cloths with some soap and water and then play an average game of kickball.

Now that you know how to build the field, have some fun!

Gather your friends on a hot summer’s day and enjoy a fun round of this tricky game.

Boys and girls of all ages will love the fun and competitive feeling that the slippery kickball field provides. If everyone playing is having a blast, it is unlikely that you will care about keeping score.

Make sure to check on the field after every few rounds and make fixes where needed.

Some stakes may rise out of the ground and will need to hammer it back in. We don’t want a tarp stake to poke someone’s foot. It is also a good idea to refill the pools and add more soap to the tarps to keep the fun going.

Before you start playing slip and slide kickball, it’s not a bad idea to stretch out to help you prevent some major strains, sprains, or aches.

As with any water activity, don’t forget to put on a generous coat of sunscreen to avoid a painful sunburn at the end of the day. If you’re playing with a variety of age groups, make sure to set some rules on how “rowdy” you can get to avoid preventable injuries.

Snorkeling 101: Everything You Need To Know