Racquetball, sometimes called paddleball, is a super fun racquet sport played on an indoor court with a hollow rubber ball. Unlike most racquet sports, racquetball is played without a net or out of bounds areas. All four of the court’s walls along with the floor and ceiling are all legal playing surfaces in racquetball.

​The Origins and History of Racquetball

​While we’re answering the question of what is racquetball, it is important that we talk a bit about the origins and history of the sport.

Racquetball is a relatively new sport. It was created early in the 1900s by combining several popular sports like handball, tennis, squash, and jai alai. The game first appeared in the United States in the 1920s.

A professional handball, tennis, and squash player from Greenwich, Connecticut named Joseph G. Sobek has been credited with the invention of modern-day racquetball. He was working at a rubber factory in the 1940s when he designed the first rubber ball used in the sport today.

In 1952 Sobek founded the Paddle Racquet Association. From there he distributed rules for the game to all of the YMCAs in America. Racquetball quickly gained in popularity. In fact, by 1969 racquetball had become so popular around the world that a man named Robert Kendler founded the International Racquetball Association. That’s when the name of the sport was officially changed to racquetball. 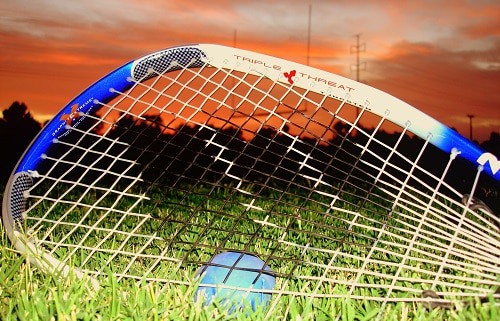 ​Today there are more than 20 million people worldwide competing in the sport.

There has been a world championship held every year for the sport since 1981. And in 1995, the International Olympic Committee approved racquetball as an official Pan American Games sport.

Racquetball enthusiasts have high hopes that one day it will be an official Olympic sport too.

The rules of racquetball are established now but they can vary slightly by region or country. Australia, for example, plays the game in a standard international squash court which measures 32 feet by 21 feet. But Americans play in a court that measures 40 feet by 20 feet. The Australians also consider the ceiling to be out of bounds. In America, the ceiling is legally in play.

​The Objective of the Game

As we answer the question of what is racquetball, let’s talk a little about the game’s objective.

In racquetball, your objective is to win rallies by returning the ball or by serving so that your opponent can no longer keep the ball in play.

You can play racquetball with either two players (singles) or four players (doubles). There is also a variation of the game that you can play with three players called cut-throat.

When you play cut-throat, one of the players serves to the other two opponents. If the server wins a rally, they earn a point. However, if they lose the rally, then one of the other players becomes the server.

You score points in racquetball only when you are serving. A point is earned when you serve an irretrievable shot, called an ace, or when you win a rally.

You win a match in racquetball by winning two games.

In racquetball, you play the first two games of the match to 15 points. You only need to win the game by one point. If each player wins one game then you will need to play a tiebreaking game. The tiebreaking game goes to 11 points, and you need to win by at least 1 point.

​Equipment You Need for Racquetball

While we’re discussing what is racquetball, you should be aware of the equipment required. One of the things that we love about this sport is that it doesn’t require a bunch of expensive gear and equipment.

While we’re talking about what is racquetball, it’s important that you know that there are many health benefits to playing the game.

For one thing, it burns a ton of calories. On average you will burn between 640 and 822 calories per hour of play.

Another thing that we love about the game is that it works nearly every muscle in your body. Because you are using large muscle groups for sustained repetitive motion, you will burn more fat and calories.

Throughout a typical game, each player works at a constant rate of 75 to 85 percent of their maximum heart rate.

An average racquetball game takes about 20 minutes. And in that 20 minutes each player will run a distance of around 3,650 feet. That means you’ll run more than two miles in one hour!

You will get both aerobic and anaerobic benefits from playing racquetball. You will benefit from the sustained high-level heart rate along with the quick bursts of energy.

Here are a few tips to get you started.

Take advantage of your opponent’s weaknesses

In order to be successful at racquetball, you are going to have to learn how to diagnose your partner. Take time during your warm-up to find out your opponent’s weaknesses. Are they weak in backhand shots? Do they have trouble with low shots?

During the warm-up make sure that you offer a wide variety of shots and speeds so that you can find where your partner’s weaknesses are. Then take advantage of those weaknesses during gameplay.

​Try to stay in the center of the court

One popular racquetball strategy is to try to stay in “the home” or the center of the court. By staying in the middle you will be just a few quick steps away from any shot. Staying mostly in the center will also help you to put more speed on the ball.

Another thing that you should do is to try to keep the ball away from your opponent. Try to hit the ball so that it lands in the backcourt. Or try to hit it into a difficult area around knee height.

Keep an eye on your opponent. Know where they are standing at all times. If they move too far forward or back, or if they move too far to the right or left you can take advantage of their position and hit the ball into the open area where it is tough to hit back.

​Hit to the back court

While you’re learning about what is racquetball, it’s important that you learn where to hit the ball. It’s a good idea to try to hit the ball into the back of the court as much as possible. The further the ball is from the front wall, the more difficult it is to accurately return the ball.

You’ll earn a point if your opponent misses the wall.

You should try to switch it up. Mix up your light and heavy shots. This will keep your opponent running around the court and will make it easier to catch them out of position.

​But avoid the back wall

One thing that you should avoid is slamming the ball off of the back wall. When you do this, you slow the ball way down. That means that it will be easier for your opponent to hit.

If you’re having trouble not hitting off the back wall, try aiming lower on the wall in general. Another thing to keep in mind is that if you hit the ball at a lighter speed, you’ll have more control over where the ball goes.

​Stop hitting balls into the ground

Many beginner racquetball players have trouble with this one.

You want your racquet to face forward when it hits the ball. Otherwise, the ball will go in whatever direction your racquet is faced.

Another problem you may face is that you’re swinging incorrectly. When you swing your racquet it should stay relatively level with the ground.

​​Learn from experienced players and videos

Finally, pay attention to experienced players. When you watch more experienced opponents either in person or on video you can see the different types of shots that they make and which ones work better than others.

An experienced player can teach you styles and techniques. They will also be able to point out flaws in your game and give you pointers to work on.

Here’s a good video to watch while you’re answering the question of what is racquetball.

​What Is Racquetball? The Bottom Line

Now that we’ve answered the question, “what is racquetball,” hopefully you have a better understanding of this exciting sport.

Before you start practicing you should read through all of the rules of the game. It’s also a good idea to pair up with a more experienced player so that you can learn the proper techniques from the beginning. It’s a lot easier to learn how to hit the right way than to later have to unlearn bad habits.

Now we want to hear from you! Let us know in the comments section below what you think about racquetball. Are you new to the sport? Do you have any great tips for other newbies? Share those with our readers too.

Best of luck with your game!