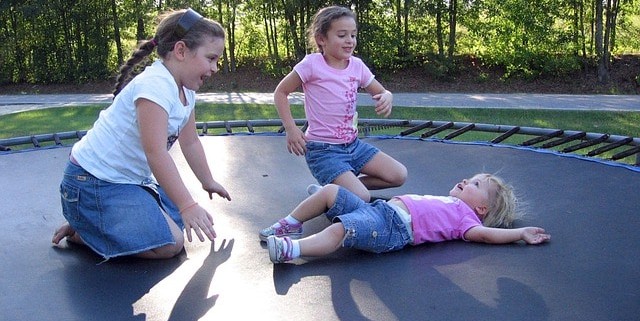 Trampolines are oodles of fun for all ages. Not only can you jump to your heart’s content, but there are numerous games that one can partake in while on the trampoline. Games are fun to play with small groups of people, but also with large groups, and are a great way to organize play and activities when entertaining a crowd or hosting a party.

There is a huge variety of games that can be played on a trampoline, such as the following:

This is an exciting game that is best played with three or more participants. To really spice things up, try it out at night! (Best played on a trampoline with a net enclosure in order to prevent anyone from falling off.)

This game can easily be played with as few as two participants, but the more the merrier! It is also best played on a trampoline with a safety net enclosure so that the “egg” does not accidentally fly off the trampoline.

In crack the egg the “egg” sits in the middle of the trampoline with his or her knees pulled up to his or her chest, arms wrapped around the knees, and chin tucked down.  The other participants jump around the “egg” until he or she “cracks” – they let go of their legs. The players trying to crack the egg cannot jump within a foot of where the egg is seated, nor can they touch the egg in any way. Once the egg cracks, it is then a new player turns to be the egg.

A soft, bouncing ball is needed, such as a basketball or volleyball, to play this trampoline game. Two or more people stand in the middle of the trampoline and one person throws the ball up in the air while yelling, “Cherry bomb!” Everyone jumps around to keep the ball hitting them, and to also keep the ball bouncing.

Each person is allotted five lives. Being touched by the ball is a loss of life. If the ball falls off the trampoline (or on a net-enclosed trampoline, if it touches the net), all participants lose one life. You play until only one person has any lives left.

To make this game more challenging, you can have several balls bouncing on the trampoline at once!

In this game, each person acts as the bouncing ball. One person begins by standing in the middle of the trampoline and falling down directly on their bottom and bouncing. They bounce on their bottom on the middle of the trampoline without the use of their hands as many consecutive times as they are able. When they stop bouncing, then it is the next person’s turn. That person tries to surpass the first person in how many times they can bounce on their bottom. This continues until someone can no longer surpass the person before them, at which point that person is out. Each person who cannot surpass the previous person is out, until only one person remains. This game is great for any number of participants, but a minimum of two.

To make things a bit more exciting, you could play this with a sprinkler running underneath the trampoline on a hot, sunny day!

Due to the wild boar being blindfolded, this game is best played on a trampoline with a safety net. 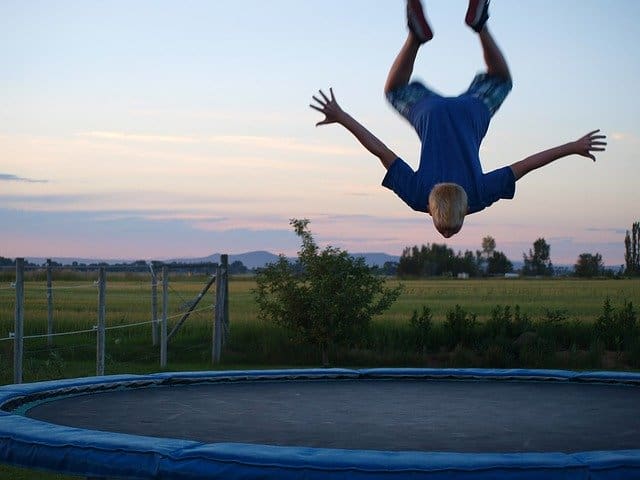 The trampoline game of Tramp is reminiscent of “Horse” meets “Copycat” on a trampoline. It can be played with a minimum of two people, but more is certainly enjoyable.

All the participants stay on the outskirts of the trampoline while one person performs a trick in the middle. The trick may be as easy or difficult as the person desires/ Each person must then take a turn repeating the trick. If they are incapable of repeating the trick, they then earn a “T.” Each subsequent inability to mimic a trick warrants them an “R” and then an “A” and then an “M” and then a “P.” As each person earns a “P” they are out. Whoever is left having not earned all the letters after everyone else has gotten out is the winner.

For a longer game, you can spell out all of the word “trampoline.”

Akin to the old school game of “telephone” where a whispered sentence goes down a long chain in hopes of it being the same at the end, this is also a long sequence of events that are repeated until they can no longer be remembered in order to be the same.

In this game, all the participants sit on one edge of the trampoline. One person goes first and performs a “trick,” i.e., drop on their bottom, do a pike jump, spin, etc. The next person then performs the first trick, and then adds a trick of his or her own. This sequence continues with each person correctly imitating the tricks performed prior to them and then adding their own. This continues until someone can no longer remember the sequence correctly. Once someone does not perform it in the proper order that person is subsequently out. This continues until everyone forgets the sequence properly. The last person to perform it correctly wins.

This game could be played with as few as two players.

For the game of Slithering Snake, a minimum of three people is needed. A jump rope is also needed as the “snake.”

One person, who is in control of the snake, stands on the side of the trampoline and moves the jump rope back and forth over the surface of the trampoline, being sure not to lift it off the surface. The players on the trampoline must jump around, avoiding the moving snake so it does not touch their shoes or ankles, and also can not run into one another. If the snake touches them, they are out. This continues until there is only one person left who has yet to be tagged by the snake.

And last but not least, another great trampoline game. Who does not dream of being a ninja? Or at least playing the part of one! For this game, you need a minimum of three people. It is best played on a trampoline that has a safety net so that no one accidentally falls off.

All of the participants except for the ninja are blindfolded. The ninja then must cause each of the players to fall down; but the ninja is not allowed to kick, punch, or use any other sort of move that could actually harm the blindfolded participants.

For this game, you’ll need two people – and one of them needs to be the barrel. We recommend letting the smaller person be the barrel as to avoid any potential accidents. The barrel has to roll around on the trampoline and try to knock the other player over. Of course, we recommend that the other player not be too heavy as to avoid hurting the barrel. It’s a fun game as long as you take care not to hurt one another.

You have to roll balls onto the trampoline while someone else jumps. Or, alternatively, have other people throw balls around the trampoline while you jump. The goal is to avoid the balls, as they are “poison”. If you get touched by a ball, you must get off the trampoline. When only one person remains on the trampoline, the game is over and that person is declared the winner. In case you don’t have balls, you can use other replacements, such as creating your own balls from paper, plush toys, etc. Use your imagination.

One person plays the role of the chicken and must stay in the middle of the trampoline. Others scatter around the trampoline and their goal is to try not to fall. The chicken can use any creative method to make the others fall down. They can do so by jumping, making them laugh, or even throwing balls at them. Once all of the players have fallen, the chicken wins the game.

Piggy in the Middle

You might already be guessing what this game is about from the title alone. One player will stand in the middle of the trampoline, while the two others stand outside of it, at opposing ends, and try to pass a ball from one another. In the meantime, the piggy must bounce and try to catch the ball. The two outside players can slowly move their way around the outskirts of the trampoline to try and confuse the Piggy, but they must always throw it over the trampoline. If the Piggy catches the ball, the person who threw it becomes the new Piggy.

With some many trampoline games, it is difficult to ever be bored! Most trampoline games can be spiced up by adding an element of darkness or water. And although most can be played with only two to three people, the more people the more fun and suspense!

Make sure you check out some of our best rectangular trampolines.