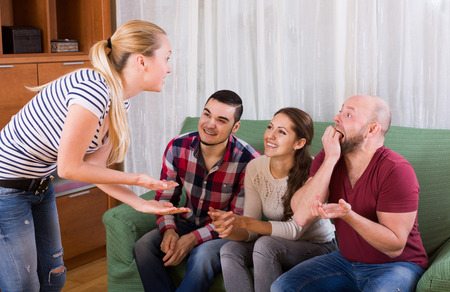 If you are looking for a list of never have I ever questions, you have come to the right place. This extensive list is sure to lead any group of people to hours of fun. You can play this game anytime and anywhere, with your adult group of friends or with the kids at home.

200+ Never Have I Ever Game Questions for Endless Entertainment

Once again, it’s your turn to host a game night and you’re running out of ideas. Of course, there is always the Fishbowl Game to play at home, but maybe you are into something even more fun. You may also want to get some inspiration from our assorted collection of fun things to do with the kids at home, but maybe you are not so much into baking or building forts these days.

The board games you have are getting old, and everyone has played all the card games ever, and possible. Sometimes, gatherings can be boring and serious already. Why not try a verbal game? Playing Never have I ever could be the perfect icebreaker!

On the other hand, keep in mind that the Never have I ever questions tap into peoples’ secrets, relationships, and personal adventures, so stop whenever someone feels uncomfortable with answering them. It is like the Newlywed Game – some questions should sit a few rounds out if the participants are reluctant in answering them for the fun of the game.

So let’s begin our quest to select the best Never have I ever questions for the next party you throw for friends and family!

Gather your circle of friends or your family members to play this party game. You can either call them or message them on social media. You’ve never played before? Well, that’s even better! Let’s jump into the rules first!

Rules of the Never Have I Ever Game

Never Have I Ever is an easy, safe, clean, and fun way to play a game by using the point system. In this variation, each player should start with 10 points.

The Never Have I Ever Game is best known as a drinking game, but this variation can get out of control if not monitored. Players might be drinking a lot if uncontrolled. Also, make sure that if you turn this game into a fun challenge for teenagers, you keep your proverbial foot on the brake, as some of the questions can make your teens feel uneasy and some answers might downright shock you if you are the parent. So don’t let something fun turn into something cringy. It is the most important rule!

Now that we’ve explained the Never Have I Ever game, you’re probably anxious to get started, but how do you find enough questions to keep it exciting?

We’ve tried to keep the adult questions rated “PG-13” so that you can incorporate some of them into a fun family game night if you want to.

Best Never Have I Ever Questions for Adults

Here are some of the best Never have I ever questions for adults you can use next time you organize a party for your friends and you want to switch from Charades and other society indoor games on rainy Saturday nights. Keep things simple, don’t overstep your boundaries – with people you don’t know that well – and keep things under control if the drinking gets too heavy. Some of the Never have I ever questions on this list work best with people close to you, as many can either trigger bad memories or judgment, while others may seem inappropriate overall.

Best Never Have I Ever Questions for Kids

When you play the Never have I ever game with kids, keep in mind that you can use them as ice breakers for youth activities or fun “let’s get to know each other” games with small children. If you are a parent or a teacher wanting to play this game with the class or during camp, make sure you want to hear the answers first, in case your participants decide to YOLO and tell you the truth. Such games – just as they go for adults – can trigger bad memories. If some of the questions are too sensitive, they may encourage the participants to lie and this is not the main idea of this game.

Best Never Have I Ever Questions for Couples

As you can easily figure out, these Never have I ever questions are of the “dirtier,” more intimate kind and you should only ask them to people you know very well, who do not get upset or offended easily, and to couples who know each other well enough to skip the whole embarrassment and judgments. It may work well as part of the Newlywed Game, but pay attention to not cross any line. So let’s get down to the third and final chapter of our guide and see some Never have I ever questions for couples!

10+ Never have I ever questions…

Final Thoughts on Never Have I Ever Questions

Here you have them, some of the best Never have I ever questions for your adult friends, kids, and couples you love spend time with on a casual fun day. What you need to know is that you should always have fun with this game and stop whenever the questions touch sensitive topics or make someone uncomfortable. Mix up the questions and change them around to best suit the group. Remember, if you choose to make this a drinking game, do it responsibly and never let it get out of control!

How to Play Fishbowl Game: Rules, Regulations, and Tips