How to Play Pickleball

You are here: Home1 / How to Play Pickleball

How to Play Pickleball? 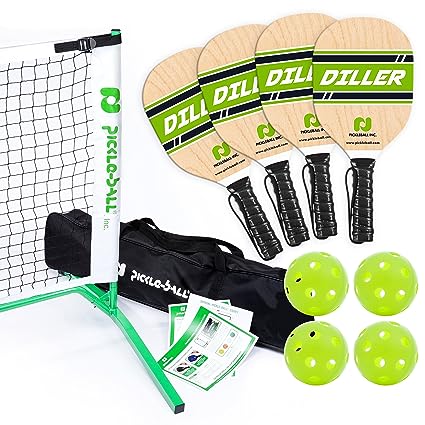 Want to learn how to play pickleball? Then let’s first look at the sport that is slowly starting to come up in terms of popularity. It is not very often that a new sport gets created, let alone liked, popularized, and played by thousands. Well, that is exactly what happened with pickleball! If you are looking for something fun to do with your friends and family, then let me introduce the game of pickleball to you.

Pickleball is a racquet sport that can be played by people of all ages and skill levels. Imagine taking ping-pong and morphing it with tennis and badminton. Now you have pickleball! The game is played on a badminton-sized court either inside or outdoors. All you need is a paddle, a plastic wiffle ball, and a slightly modified tennis net.

It is played by two or four players on a 20’ x 44’ court, which is the same size as a double badminton court. The paddles are made of wood or composite materials. The net is set at a height of 36 inches at the sidelines and 34 inches in the middle, being 20’ wide.

Is Pickleball a Real Sport?

Pickleball is played on a court that is one-third the size of a tennis court. The smaller court appeals to older players who are looking for some exercise without having a stroke in the process. Rather than spending all their time chasing the ball, they can now enjoy making more contact with it. The sport is low impact and easier on the joints than volleyball or tennis. The perforations in the ball mean that it travels at about one-third of the speed of a tennis ball, making this sport a lot less intimidating.

Don’t think that pickleball is only for older players, as it is a multi-generational game. Because it takes up less room than tennis but requires more energy than badminton and the equipment costs are less, quite a few schools are now featuring it as part of their physical education program.

Pickleball has been around for a surprisingly long time. It was invented back in 1965 by Joel Pritchard, Bill Bell, and Barney McCallum as a way to give their family something to do during the summer. The Pritchard family already had a badminton court, but they couldn’t find a full set of rackets. They did find some ping-pong paddles and a wiffle ball, though. The family loved it. The first known pickleball tournament was held in 1976 in Tukwila, Washington. The USAPA was created in 1984 and soon published the first rulebook. By 1990, pickleball was being played in all 50 states. Since 2000, pickleball has been included in the Senior Olympics.

Currently, pickleball is played in the United States, Canada, India, France, Spain, and the United Kingdom. In 2010 the International Federation of Pickleball published their first rulebook.

How did this sport get such a sour name? Well, there are a couple of possible answers to that question. Joel Pritchard’s wife, Joan, said “the combination of different sports reminded me of the pickle boats in crew where oarsmen were chosen from the leftovers of other boats.” But the Pritchard family also had a family dog named Pickles who liked to run off with the ball. Either way, the name did come from the Pritchard family.

How to Play Pickleball

After the ball has bounced once on each side of the net, both teams may volley the ball either with or without a bounce.

There is a non-volley zone 7’ on both sides of the net. This keeps players from smashing the ball. If the player or their paddle crosses into the non-volley zone, “the kitchen,” then a fault is declared even if the player’s momentum carries them into the zone. A player can enter the kitchen as long as they are not volleying a ball.

The USAPA has also assembled a summary PDF of the basic rules of pickleball which can be downloaded here. If you want to learn how to play pickleball from the pros, check out these videos at USAPA.

Can the elderly play pickleball?

Pickleball, in fact, is a game that is very suitable for the elderly, as it does not require extreme effort. It is a mobile sport that takes itself lightly and that allows for casual play, which means that many old folk choose to pass their time with it. It doesn’t require intensive bending of the joints or feats of athleticism or acrobatics other than springing from place to place and swinging the arm, either. Pickleball is even considered by some to be a sport for old people, even though this is certainly not the case.

The truth is, the age group of pickleball players is very much skewed towards older people. The sport is not particularly intense, which makes it suitable for their advanced age. With that being said, this sport is certainly not just for older people, as even hale, healthy adults with a passion for more adrenaline-inducing sports like tennis can grow to enjoy pickleball. The game is also a great choice for children, as well!

Is pickleball similar to tennis?

Pickleball has many things in common with tennis, making it easy to confuse the two. In fact, most tennis players who reach 40 years of age often change to less workout-intensive sports, since pickleball requires a lot less movement than tennis. You have to swing your arm less and don’t need to cover as much ground as otherwise. On the other hand, a child growing up learning how to play pickleball can very easily transition to tennis later on.

The sport of pickleball is extraordinary for losing weight since it requires you to make a lot of calorie-burning movements.  It’s estimated that you can lose as much as 500 calories after an hour of playing pickleball. Paired together with a diet, this can really help you lose weight.

Pickleball is an adrenaline-feeding addictive sport that is an absolute blast to play. It is so much fun that you might be tempted to skip work just to go play and your kids just might want to spend the weekend with you rather than simply hanging out with their friends.