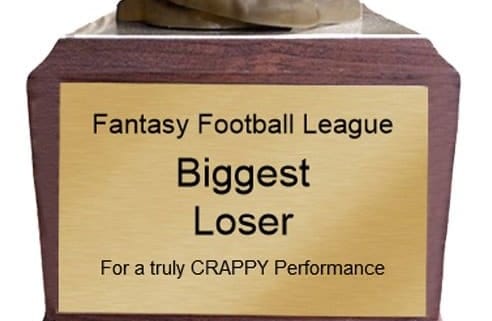 Fantasy football is more popular than ever! In 2017, 15.6 million people in the United States played fantasy football — a record number and a huge increase from previous years.

The game has become hugely popular because it combines strategy, sports, and competition in a fun way.  Players get to hang out with each other and make new friends while enjoying their football.  They also get to poke fun at each other when their teams win or lose!

This loser’s trophy symbolizes the complete ineptitude displayed by the last-place fantasy football player.  It’s a hilarious way to poke fun at them and can sometimes turn into a badge of honor!  To give you some ideas about what to get the “loser” in your fantasy football league, here are a few of the trophies that are available.

Some of The Best Fantasy Football Loser Trophies 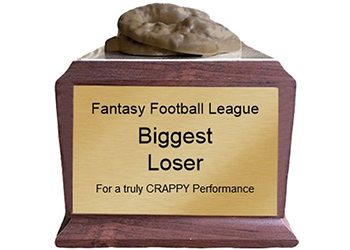 Did the loser in a fantasy football league build a team that really played like crap all season?  Why not celebrate their crappy decision-making with a pile of crap trophy!  This trophy features a plastic pile of crap sitting on top of a wood base.  You can specific 4 lines of text to be written on the plaque, so you can add the loser’s name and the season that they lost in. 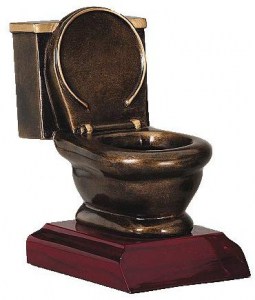 With this trophy, you’re able to symbolize the loser of the league with a hilarious toilet bowl trophy! It even has the option to purchase with a custom engraved plate. What better way to symbolize their poor decision making skills than with a toilet?

The trophy itself is five inches tall with a gold finish. The engraving plate includes 3 lines with up to 30 characters and spaces per line.

This toilet trophy is high-quality and can be passed from loser to loser each season. It can be used for generations to come! There’s no better quality family moment than making fun of each other. 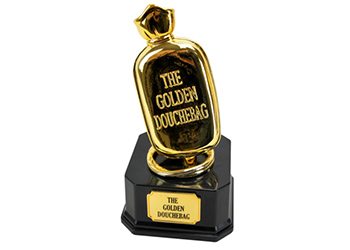 Did the last place getter in your league pick some real douchebags in his team?  Why not give him a douchebag trophy to commemorate that fact!  This trophy features a golden douchebag on top of a black plastic base with a small plaque.  Despite being made from plastic, it is a well-built trophy that can be passed down from loser to loser. 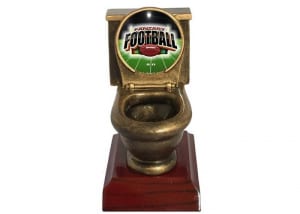 This is another toilet bowl trophy that is perfect for the loser in your group who chose a seriously stinky team.  It is a bronze colored plastic toilet bowl sitting on a timber base.  There is a fantasy football logo on the toilet lid and room for 3 lines of custom text on a gold metal plaque that is mounted on the base. 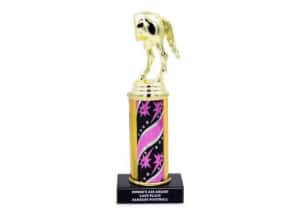 Did the last-place-getter in your team really make a horse’s ass out of himself by picking players that everyone else advised against?  Then this trophy is the perfect option.  This fantasy football loser trophy features a gold Horse’s Ass mounted on top of a pillar with a marble base.  The column features a bright pink design to really emphasize the ignominy of coming in last!  This trophy is 8-inches tall, with a base that is 3-inches x 2-inches.

You can also check out the Horse’s Rear Bobblehead Award.  This 5.5-inch high award features a silver and gold bobble-headed horse display its rear!  It has room for 3 lines of text to be engraved on the base.

Here are a few other gift ideas that can be used in addition to or instead of a trophy.

“I SUCK AT FANTASY FOOTBALL” T-SHIRT 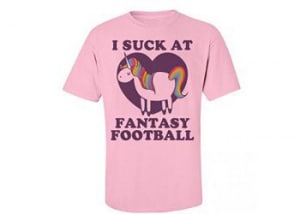 If none of the trophies sound appealing, you could consider the “I suck at fantasy football t-shirt”!  This lovely bright pink cotton t-shirt features the image of a unicorn with rainbow colored hair and the text “I suck at fantasy football”.  It is a great way to really emphasize someone’s inability to do well at the game!  Having the lowest scorer wear the shirt for a week is the perfect way to commemorate their loss. 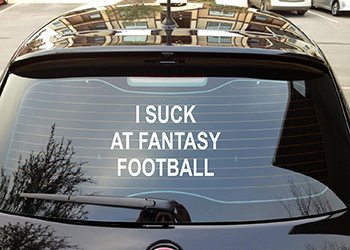 If you want to really punish the loser in your group, force them to adorn their car with the “I Suck at Fantasy Football” window sticker.  At over sixteen-inches wide, everyone in the neighborhood will soon understand exactly who the loser was in your fantasy football league! 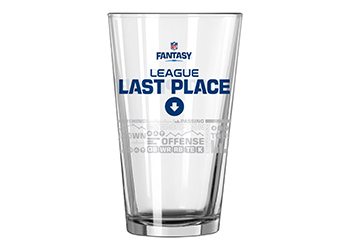 If you don’t want to be too mean to the loser in your group, you could always get them a beer glass that symbolizes their horrible decision-making capabilities.  This official NFL fantasy football league glass is so cool that they won’t mind losing! 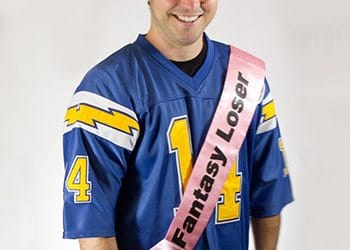 In addition to awarding the loser a fantasy football trophy, you can give them a specially-made fantasy loser sash and crown!  This lovely pink sash is the perfect way to commemorate their loss.  You can throw in a bunch of flowers and make them walk around the local shopping center or go to work wearing it!

There you have it, some of the best walking shoes for overweight walkers. Check out some of these meal replacement shakes to help you with your journey.

How do you play fantasy football?

The basic concept is relatively simple. You select a real player and earn points based on that real player’s performance in the real world. Your entire fantasy team is comprised of different players from different teams, and you choose them however you want. The team’s score is calculated based on each individual player’s performance. If your fake team scores more points than other people’s fake team, you win (and get to rub it in their face on Tuesday morning).

Is it too late to start a fantasy football team?

It depends on the time you are reading this article. You should do your research and find out when the official fantasy football league season has started. Each official website will start their own season as they please, and each one has its own general rules. However, generally speaking, most websites will allow you to start your fantasy team as late as four weeks within the start of the season.

Can you do a two-person fantasy football league?

The average fantasy football league has 12 teams. But if you want to create a mega-league with all of your co-workers or your entire neighborhood, then we can accommodate you! Note that each team can have multiple co-owners as well, so two friends or co-workers can share a team if desired.