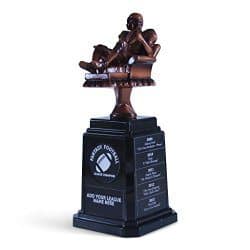 Fantasy football season is one of the most exciting times of the year. Whether it’s your family, friends, or coworkers, there is plenty of trashing talking to be involved. Most fantasy leagues have some sort of prize for the winner and your league should too. The easiest way to manage the purchase of the trophy is to make the fantasy football league manager responsible for picking out the award. The league manager collects the money (up front) and has the freedom to pick whichever award he deems suitable for the league. Too many opinions can lead to a lot of wasted time.

Fantasy football trophies make great league prizes. I like them so much because I can put my trophy where everybody can see it. If you simply win money it is instantly out of sight. If you are playing with coworkers, you can put the trophy in your office. Every time somebody stops by your office they can see that you were the champion that year. Sometimes I even like to mention it just in case they didn’t get a chance to see it. Do your friends stop by your house often? Make sure your trophy is out for them to see. Put it on the mantel or close to the television. Put the trophy in your game room where your friends and you like to gather.

Below you are going to find the best fantasy football trophies available. These trophies are all available on Amazon and are all highly ranked. You will be able to easily see the comparison chart to make an educated decision when it comes to purchasing the right fantasy football trophy for your league. Make sure you know whether you want a perpetual fantasy football trophy or not. It’s better to take your time and do some proper research before buying a specific trophy that you might want for your collection or to give as a gift to someone who’s dear to you. In any case, let’s get on with the rankings.

The winner of your fantasy league can show off their fantastic decision making skills with this winner’s trophy from Decade Awards. The best part about this trophy is that you can choose to purchase it with an engraved plate. The engraving can say anything that you want it to, whether it’s the winner’s name, the league’s name, the season, and/or the winner’s team name.

This trophy is the perfect size for any desk, shelf, or anywhere that you want to show it off! It is 6.5 inches tall, with a gold finish plate of 2.5 inches by 0.75 inches. As for the engraving plate, you can enter up to 3 engraving lines with up to 30 characters and spaces per line.

This is definitely a trophy that all players in the league will want to work hard to earn! It will look amazing throughout the entire year, until the next season when everyone will compete for it again. The trophy is durable and long-lasting, so you can pass it down season to season for generations to come. 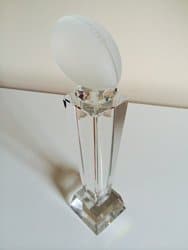 This is a solid fantasy football trophy. It weighs roughly 2.4 lbs and stands nearly a foot tall. It is made out of solid K-9 crystal. Its width is 2-5/8” wide.

This can be used as a perpetual trophy. You can literally engrave all over the trophy except for on the football itself. This trophy looks good on your desk or on your mantel. It’s not made of cheap resin or plastic like some of the other fantasy football trophies being sold. This has the higher end feel to it.

What I like about this trophy is that it shines. When you put it in your trophy case or up on the mantel the light just seems to beam off it. The FFL logo on the front is nicely made and doesn’t seam cheap or tacky. Any fantasy football winner would be happy to receive this as a fantasy football award.

THE GOLD MINE OF PERPETUAL FANTASY FOOTBALL TROPHIES 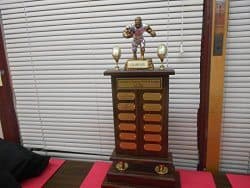 Now this trophy is a site to see. Coming in at nearly 24 inches tall it’s going to be one of the biggest fantasy football trophies you see. With the massive size comes a hefty price tag, but who cares. When you split it up between the ten to twenty fantasy football players in the league it turns out to be mere peanuts for this beauty.

This perpetual trophy has 12 engravable plates on the 10” x 3” bottom base. Each plate will allow you to engrave 20 letters and 3 lines. The plates can easily be adjusted by removing the two little screws holding them to the base. If you wanted to secure more plates to the backside of the trophy, I don’t see a problem with that.

This trophy is going to require some minor assembly. The manufacture ships this trophy unassembled to prevent damage during shipping. It will be well worth the time it takes to assemble it. Heck, you could even have the loser of the fantasy football league assemble it for the winner.

I like this trophy because it represents what fantasy football is all about. The design is simple but it works. It’s got a sleek black base. The figure on the top is a bronze metallic color. The figure is a quarterback sitting in a chair holding a football.
This is a perpetual fantasy football trophy as well. What’s nice is you can have it customized when you purchase it through Amazon. They can put your league name on the trophy and put the previous 4 years winners on it. This trophy stands 12 inches tall and has a plastic base. It’s a little more top heavy than other trophies but it shouldn’t be an issue.

Overall this would be a great fantasy football award for your league.

There you have it, 5 of the best fantasy football trophies available. Hopefully you have found this helpful and you are now equipped to buy the fantasy football trophy that is right for your league. The bigger and more expensive the award the more intense the league can get. You might also consider getting afantasy football loser trophy.  This trophy is given to the person in last place. This will help keep everybody fighting until the very end.

Can you play fantasy football for free?

If you want to familiarize yourself with the world of fantasy football before starting to bet in the big leagues, there are ways you can indulge in this hobby for free. As an example, the NFL itself has an entire page dedicated to this topic. Similarly, ESPN also allows its users to try out fantasy football for free.

Who is the most accurate fantasy football expert?

At the time of writing this article, the fantasy football expert with the most accurate predictions is Pat Fitzmaurice, also known as The Football Girl. Coming in close second is Sean Koerner followed closely by Allie Fontana. However, these people are hard to reach and their advice is probably expensive, so you’re better off searching for prediction articles on specialty websites.

What positions should you draft first in fantasy football?

For most intents and purposes, you’re best off drafting wide receivers and running backs first, followed by a tight end, then a defense, then a kicker, and finally, a quarterback. Usually, quarterbacks are overrated so you’re better off following this formula until you get a better hang of how fantasy football works.

How much money does fantasy football generate?

The entire fantasy football market was worth 7.22 billion U.S. dollars during 2019, and it only kept growing during 2020 even though no official data has yet to have been released up until the time of writing this. It’s safe to say that it’s a huge market with an even bigger growth potential than it had before the now-infamous pandemic.