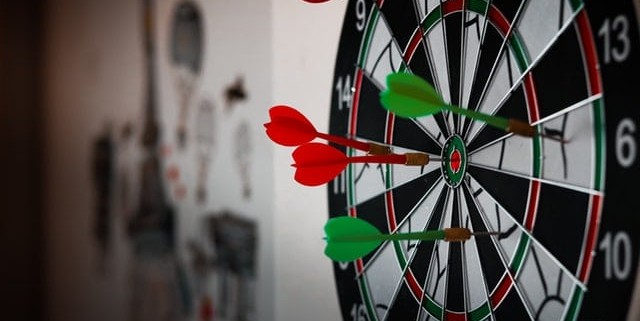 1860 – Year in which first dart games were played. Ever since then, the game is attracting fans by the droves. Perhaps you and your friends and family can give it a go with these 16 easy to play games.

The player wins by reducing their points to 0. Each part of the board carries a different score. To finish and win the game you must hit a double. For example, with a score of 16 remaining a player can win by hitting double 8. 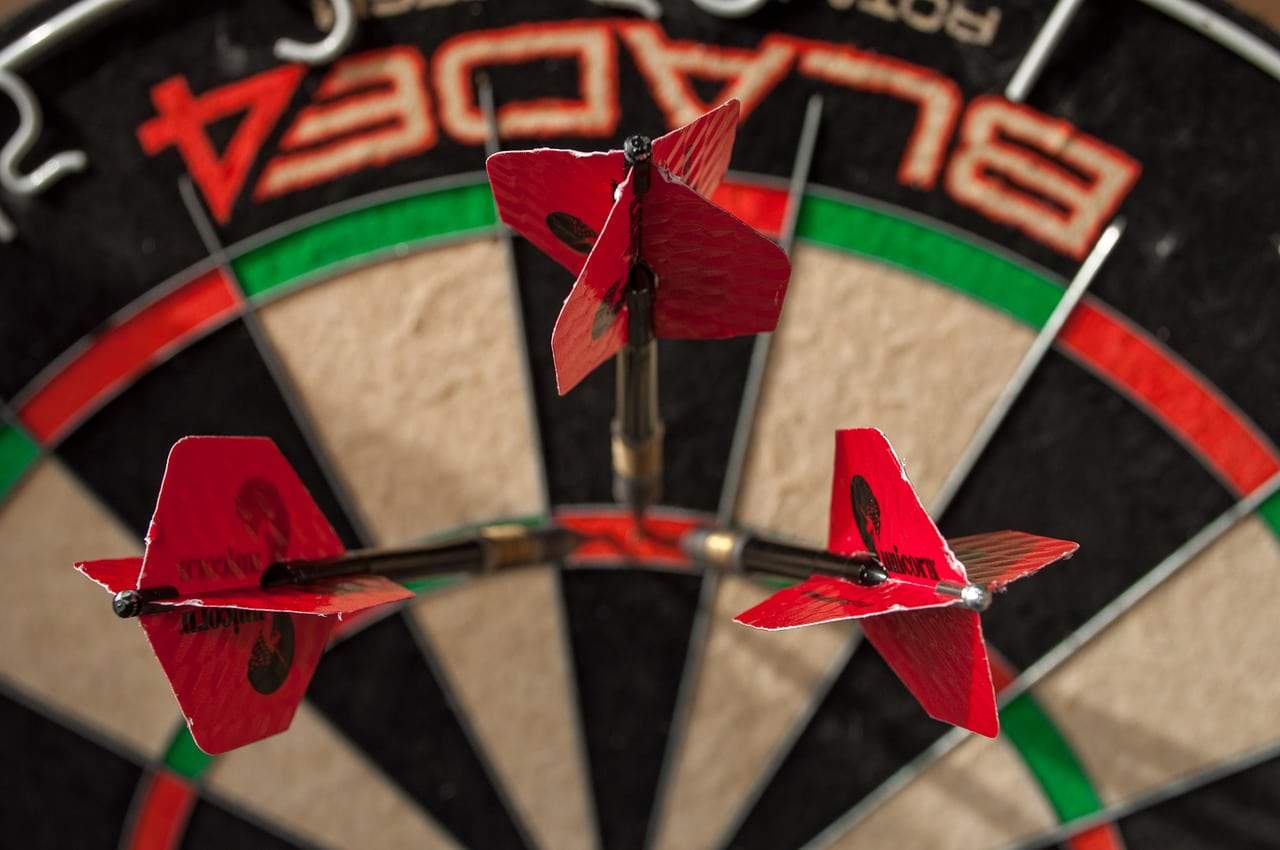 The maximum score you can get is 180. The aim is to hit each number three times. A single one each time on the spots equals a score of 60 and a triple hit each time will get you 180.

Chase the Dragon is one of the most loved dart games. The aim is to hit the designated numbers from 10 to 20 as well as the outer and eventually the inner bull. The points must be hit in sequence. To win the game, run all 12 scoring areas before your opponent.

Two players or teams race to close stated numbers (called innings) on the dart board. An inning is closed when a player scores three of the numbers. The first to close all innings is the winner.

One player is the batter while the other is the bowler. The batter goes first. 10 stripes (wickets) are entered on the dartboard. The bowler’s aim is to erase these wickets by hitting bull’s-eyes. Each bull’s-eye strikes down a wicket. The batter works to score as many points or runs while any wickets remain. Once all the wickets are crossed out, points are noted and roles reversed.

These dart games involve the hound chasing the hare. The first player (hare) starts at 20, while the hound starts from 5. The hound chases the hare with the aim of catching it before it returns to 20.

Can be played by up to 5 people. Players blindly pick numbers between 1 and 20. Players hit their number’s double 3 times in order to become a killer. The killer then plays the other player’s double 3 times, killing them. The remaining player wins.

Players throw a single dart to start off the dart games. Player closest to the bulls-eye gets to play first. Following player has to hit a higher score. Failing to do so, their name is circled. A player that gets 3 circles is eliminated. Last man standing wins.

In this dart games, you are required to close a number (20 through to 12, doubles, triples, and bulls-eye) by hitting it thrice. The first player is the one who hits closest to the bulls-eye.

This is more of a race to hit numbers 1 – 20 sequentially. Players are given 3 lives, each life with 3 darts. If a player mishits with the 3 darts they lose a life. Failure to hit with 3 lives leads to elimination. Last player remaining wins.

Follows the same principle of the paper game. Players have to close out a square on a pre-drawn 12-square box with the target numbers written in the squares. 3 strikes of a number on the dartboard cross out the number on the 12-square “score sheet”. 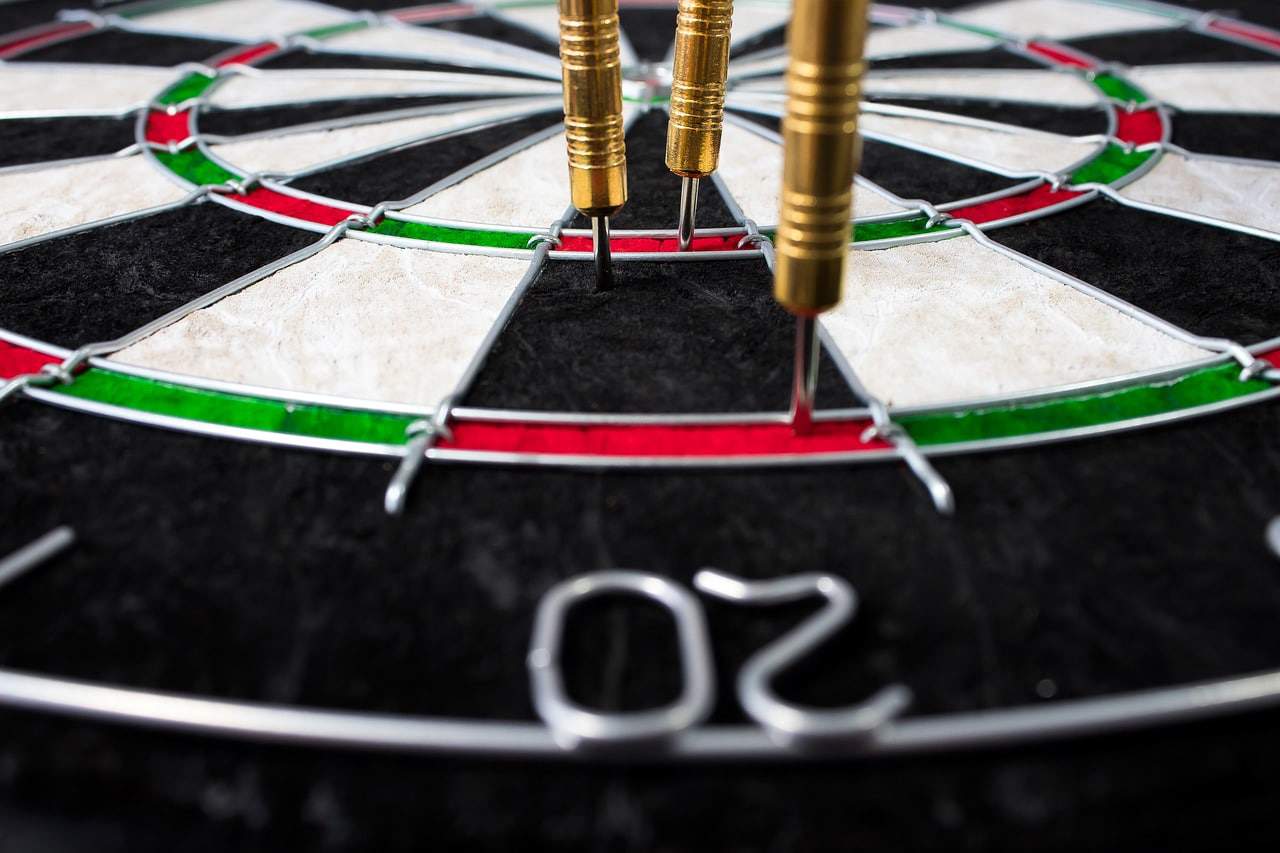 Players take turns throwing at the numbers 1 through to 7 in sequence. The aim is to score as many points as possible per turn using your three darts. Only aim for the number in play in that round, all other numbers don’t count. There are 2 ways of winning – having the highest score at the end of the game or by “shanghai-ing”. To Shanghai, you have to hit the single, double and triple of the number in play. A Shanghai is an automatic win.

The objective of this dart games is to accumulate a score divisible by 5 at the end of your 3 dart throws. Each divisible 5 is a point. To win, you have to be first to accumulate 51 points or more.

Just like the game of tennis, the winner has to win the best of 6 sets. First to serve is the one who throws closest to bulls-eye in selection round.

The game starts with the “play area” on the left-hand side of the dartboard (5 to 19) and alternates to the right-hand side (1 to 17) for the next point. The “play area” alternates between the 2 during a service game. Hitting the bulls-eye with your first dart gets you an ace.

The object of this dart games is to choose and close 6 random numbers and hit the bulls-eye before your opponent does the same. To close a number, you have to hit it 3 times. Players focus on a particular number until it is closed.

Today – The day you get a dart board and try out these games.

Golf Hacks And Tricks To Better Your Game