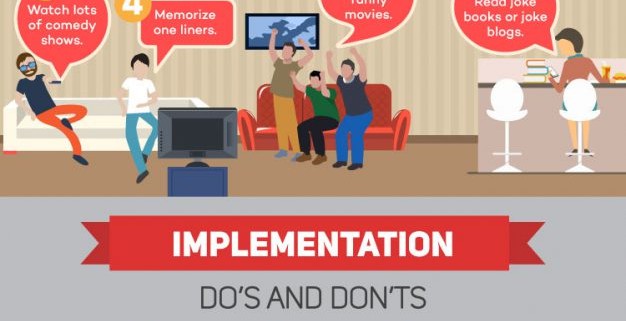 How to Be Funny

Have you wondered how to be funny around strangers? Why is it that some people have a good sense of humor and can easily make other people laugh at their jokes? What makes a person funny? In everyday life, these naturally funny people can throw a good joke or punchline in any given situation. Being funny is one of the most desired traits. But not all people have a sense of humor and can be naturally funny.

Being funny is one of the most desired traits. Below you will find 17 tips on how to be funny. These tips, if practiced, are sure to help you become funny.

Life is too short to be serious. We need some good humor in our life from time to time. So, if you are looking to learn more about how to be naturally funny and make the people in your life laugh, we have you covered. Below you will find 17 tips on how to be funny. These tips, if practiced, are sure to help you become funny.

Determine what makes you laugh – If you want to make people laugh, you can start by examining yourself. What makes you laugh? Take out a notepad and start to brainstorm. When’s the last time you laughed? What caused you to laugh? Spend about 15 minutes making a thorough list.

Observe what makes others laugh – If you want to learn how to be funny, it’s important that you become observant. When you are with others, and you find someone laughing, take a mental note, or jot down a note on your phone. Keep a “funny folder.” Here you can keep your notes of things that will make others laugh.

Memorize one-liners – One-liners are perfect. They don’t take a lot of effort and they can get the job done. “My fake plants died because I didn’t pretend to water them.

Watch lots of comedy shows – Besides being fun to do, watching comedy shows can increase your level of funniness.

Read joke books or joke blogs – There is no shortage of funny material. Head on over to Amazon and buy some of the highest ranked joke books. Use Google too and type in different jokes or funny keywords. Find a funny blog that resonates with the type of humor that you want to incorporate.

Do use sarcasm – Sarcasm can be extremely funny. Use it but don’t overdo it.

Do NOT use demeaning jokes – Demeaning can make you look like more of a jerk than someone of good humor. Don’t belittle other people or groups of people when trying to be funny.

Do NOT use mimicry – Mimicking others is annoying, enough said.

Timing is everything – When observing other people being funny, take note of their timing. If you are too early or too late, it might lose some of its humor. Practice makes perfect.

Use jokes sparingly – Don’t go overboard with your jokes. Joking too often be more annoying than funny. A perfect example of what not to do would be this guy trying to be funny, using puns at Disney. At the end of the video, you could see how fed up she was with the humor.

Don’t take yourself so seriously – In short, loosen up.

Animation and energy are the sense of humor’s best friend – Try to incorporate energy and animation into your humor. It’s harder to be funny if your monotone and low on the energy scale.

Smile to be funny – Smiling is contagious. If you are looking to make others laugh and smile, start by smiling yourself. It’s important to remember, don’t overdo it. Smiling too much can be creepy and have the reverse effect.

The Science of Being Funny

There are several theories behind being funny. No exact answer will be given by anyone because, oftentimes, humor is subjective. Depending on the type of person you are, you might prefer dark humor or you might be disgusted by it, for instance. However, the following theories give us a glimpse into why people react the way they do to certain jokes:

No matter how much of a good human you’re trying to be, deep down you know that other people’s failures make you feel superior. Even if we’re talking about a mistake that you used to make in the past, you have evolved now. And that’s why the misfortune of others makes us laugh. Think of those “funny fail compilation” videos, as they are a prime example of this theory.

Sigmund Freud first came up with a version of this theory. It’s the school of thought that says whenever we feel utterly stressed or after we’ve gone through severe tensions, the mind’s natural response is to cope. Often times, this coping mechanism gets translated through humor. That’s why many of us seem to find old gaffes funny after many years. And it’s probably the reason why many people speculate that the funniest humans are the ones who went through some severe traumas.

Incongruity basically refers to something completely unexpected. Humans, or at least most of us, have the capacity to notice patterns. When that pattern is broken and something seems out of place, sometimes our reaction might trigger a laugh. For example, we all know how cats look. But what if we were to put a toy lion mane on one? Most people would laugh. See for yourself:

Did that make you laugh? No? Well, we’re pretty sure at least a few of our readers giggled. Or so we hope. Please tell us we’re funny.

The Kick of the Discovery Theory

Ok, so this one has a rather peculiar name. But what does it mean? It refers to the fact that people often find it the funniest when their expectations are completely shattered. When something that a normal person wouldn’t even think of occurring happens to occur. Out of a million people that this theory has been tested on, the joke that got the most votes for being the funniest of them all is the following one:

“How many babies does it take to paint a wall red? Just one, but you have to throw it really hard.”

Too dark? Yes, we agree. But it certainly puts a completely unexpected twist on an otherwise regular question. And that’s what made so many people laugh until they dropped.

Final Thoughts on How to Be Funny

There you have it, 17 tips on how to be funny. Remember, being funny can be learned. The more you practice being funny, the more likely you will become funny. At first, you might want to start by practicing on some people you know really well. Don’t let them know that you are practicing. After you start to see some success with the people you know well, start to venture out. Start trying to be funny with complete strangers or groups of strangers. Practice being funny on dates and in different situations.