Blog
You are here: Home1 / Blog2 / games3 / yard games4 / Get Yourself the Best Bocce Ball Set for the Money

If you’re looking for an outdoor game the whole family can enjoy, then bocce ball is it. It’s a blast! And finding the best bocce ball set is as simple as, well, throwing a bocce ball. Bocce ball is super easy to learn and super fun to play. Plus, it’s a team game which adds an element of competition that makes it even more exciting. You and your family will love the game so much, you might even decide to put a bocce ball court in your backyard.

So, what is bocce ball, how do you play, and how do you choose the best bocce ball set? To answer that, you need to take Bocce Ball 101.

What Is Bocce Ball?

Bocce or bocce ball is a game enjoyed by people all around the world. People play it for recreation or as a tournament sport. Two people can play against each other, or there can be two teams of two to four players. The object of the game is to toss your bocce ball (the bigger ball) closest to the little ball — also known as the pallino or jack — as possible.

You play the game in frames. The team who gets their balls closest to the pallino in each frame is awarded a point. A team wins when they reach a predetermined set amount of points, usually 12, 15, or 21.

Tournament play is more precise involving all sorts of rules and regulations regarding ball sizes and weight as well as court dimensions, depending on the league. It’s even an official sport at the Special Olympics. And a modified version of bocce, called boccia, is part of Paralympic competition. However, recreational bocce ball has no restrictions on ball size and weight. Plus, you can play it on any flat surface, including grass.

Recreational bocce ball is also versatile enough that you can change the rules without penalty — like adding a drinking component after the kids go to bed. It also means you aren’t as limited when it comes time to choosing the best bocce ball set for you and your family to enjoy.

So, who came up with this game, anyway? And why is it so popular? The answer is a stone’s throw away.

The game of bocce has been around for centuries. A form of the game can be traced as far back as 5200 B.C., where a painting found in an Egyptian tomb showed two boys playing something that looked like bocce.

However, it was the early Romans who may have invented the game of bocce, similar to how it’s played today, with soldiers using rounded stones or other items as the bocce ball.

And as Roman rule spread throughout ancient Europe, so did the popularity of the game.

Italians loved the game so much that when they emigrated to the United States, they brought their favorite pastime with them, introducing it to a brand new world.

So, now that you have a little background on bocce ball, how do you bring this ancient game to your backyard? By buying the best bocce ball set, of course!

There are several factors to consider when selecting the best bocce ball set. In general, most bocce ball sets come with eight balls and one pallino or jack. The bocce balls may come in two colors, four colors, or a variety of colors. Each set of colors will usually have a different pattern, so each team member can identify their balls. Traditional bocce balls come in patterned green and red colors — just like the Italian flag. The pallino or jack is usually white and smaller than the bocce balls.

Bocce balls come in a variety of size ranges and weights. Ball measurements are mostly listed in millimeters (mm) and grams (g). However, some manufacturers list the information in inches and pounds.

Regulation bocce balls for tournament play usually must be 107mm and 920g, with lower weights for women and kids depending on the league. Also, the pallino must be a specific size and weight, but this varies by league too.

Bocce balls can be smaller and lighter for recreational play, but most bocce balls on the market range in size from 90mm and up with 107mm being the standard size. The size and weight of the pallino will vary according to the manufacturer.

A good rule of thumb to remember is that the smaller and lighter the ball, the easier it will be for kids and older grandparents to handle.

So, the cheaper the material, the higher the chance of breakage and chipping.

Also, remember that you’re throwing balls against each other so there will be some scuffing to the outer layer, even with the best bocce ball set.

Most bocce ball sets include accessories such as a carrying bag and measuring tape so you can measure how far the bocce ball is from the pallino.

If a set doesn’t include a measuring tape, you can use your own or just make estimates.

Of course, this only applies if you’re out having a good time with friends or family and not competing in a tournament.

Our Top Picks for the Best Bocce Ball Set

Although we numbered our picks, it does not signify a ranking. 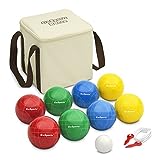 The GoSports Backyard Bocce Set is excellent for kids. The set includes eight 90mm bocce balls (1.11 pounds each), which are the perfect size for small hands. You get two balls in red, green, blue, and yellow with patterned designs, making it easy for teammates to know which ball is theirs.

The pallino is white and 1.40 mm. All balls are made with polyresin material and feature a bright, high-gloss finish.

In addition, the set comes with a carrying case so you can take the game with you anywhere. The set also includes a measuring rope, which means you can figure out whose ball is closest to the target without having to guess. 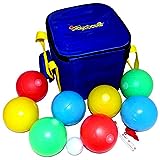 With the Playaboule Lighted Bocce Ball Set, you can play your new favorite game day or night. This set is perfect for those all-night family parties, or anytime you want to have a little fun in the dark.

You can set the balls to flash or solid light with a recessed switch that won’t affect the roll of the balls. Each ball takes three 1.5v batteries, and you don’t even need a screwdriver to open the battery compartment, which is super convenient. Plus, they’re waterproof and sand proof, which makes them an excellent choice for a trip to the beach.

The bocce balls are 107mm and 600g each and made with heavy-duty plastic. Each set comes with two textured balls in light blue, light green, red, and yellow colors. The pallino is 50mm and white.

The set also includes a carrying case, rules, two measuring devices, and even one set of batteries, so you start playing right away. 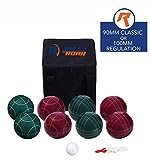 Each set includes eight 90mm balls (4 in green and 4 in red), as well as 1 white pallino. The bocce balls are patterned so you can quickly tell whose ball is whose. 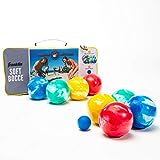 Variety is the spice of life, and Franklin Sports Bocce Ball Set is different than the rest. This set features bocce balls that are soft with colorful swirly designs. Even the pallino is blue instead of white!

The kids will love this set. And it’s ideal for playing on any soft surface like grass or even inside on your carpet.

Each set includes 8 PVC 90mm balls in red, yellow, green, and blue (2 in each color.)The pallino is 40mm. Plus, the set comes with a carrying case for easy travel. 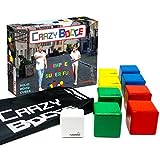 Crazy Bocce Ball Set. Indoor and Outdoor Family Fun for Everyone. A…

If you’ve ever felt like a square peg in a round hole, then Funsparks Crazy Bocce is the bocce ball set of your dreams. Sure, it’s not your classic bocce ball game, but sometimes it pays to be different. And it’s great for ages three and up, so even the littlest ones can join in the fun.

The set features eight wooden blocks (the bocce balls) in red, yellow, green, and blue. Plus, a white pallino cube.

Claim victory over your competitors at your next bocce ball game with the Triumph All Pro 100mm Bocce Set. You’ll love the look of this high-gloss set, and you’ll love playing it, too.

The set includes 4 blue and 4 yellow 100mm bocce balls, and one 50mm jack. The balls are patterned and made of phenolic resin which makes them quite durable (it’s the same stuff used for most billiards balls.) 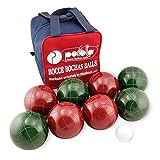 The Perfetta Club Pro Bocce Ball Set.is the real deal. The set is made in Italy by a company well-known in the professional bocce world. You’ll be spending some cash on this set, but it’s well worth it.

The balls are made with solid phenolic resin and have a 10-year warranty against breakage. That’s how confident this company is in its product.

And to make the deal even sweeter, the set comes with a carrying case. However, some customers complain the carrying case isn’t as high quality as the balls inside. Plus, you’ll also have to buy your measuring tape because you don’t get one with this set. If you’re serious about your bocce ball game or just want a quality set, this is it.

Bocce ball is a must-have game for any backyard barbecue or family event. Everyone will have a blast because it’s simple to learn, easy to play, and a whole lot of fun! Who knows? It might even become a new family tradition.

Do you love bocce ball? Share your experiences and best bocce ball set recommendations below! 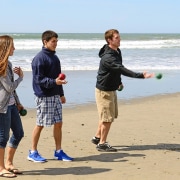 How to Play Bocce Ball: Everything You Ever Wanted to Know
0 replies