Blog
You are here: Home1 / Blog2 / lacrosse3 / What Is Lacrosse? The Origins and History of the Sport

What is lacrosse? While it might just seem like any other sport to somebody who isn’t really into sports or the history behind them, it’s not. Lacrosse is a sport rooted in tradition, which we seem to have forgotten over the years. 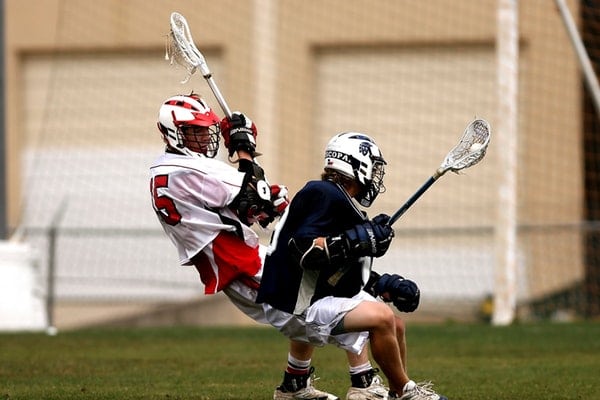 Lacrosse is a game where the players divide into teams. Though it is popular worldwide, lacrosse is most common in the United States. Over the past few decades, lacrosse has made gains in popularity.

Today, people play lacrosse in most schools around the U.S, whether as an extracurricular activity or a gym class requirement. Even if you’re not positive what lacrosse is, you probably have some rough idea.

How lacrosse is played

Though original lacrosse and lacrosse in the modern-day do have their fair share of differences, the basics are the same. Lacrosse involves teaming up, a ball, some kind of carrying stick, and a goal.

The objective of the game is to get the ball, which is smaller than a soccer ball, into the other team’s goal. You can’t use your hands, though: That’s what the lacrosse sticks are for. You stick the ball in the netted end and throw it to your teammates and, eventually, into the goal.

The History of Lacrosse

One of the earliest accounts of lacrosse comes from a document written in 1612. You can describe the game as similar to field hockey, a popular game in Europe at the time. Interestingly enough, adults originally played the game, but today kids represent the largest demographic among players.

As life evolves, we tend to forget the origins of common things in our lives. For example, do you know where ketchup originated? Do you know why?

The answer is most likely no. It’s not your fault; as things become more widely used and accepted, we naturally stop putting emphasis on their roots. That habit we have is nothing to be proud of, and it’s definitely something to work on, but that’s for another day.

The Native American origins of lacrosse 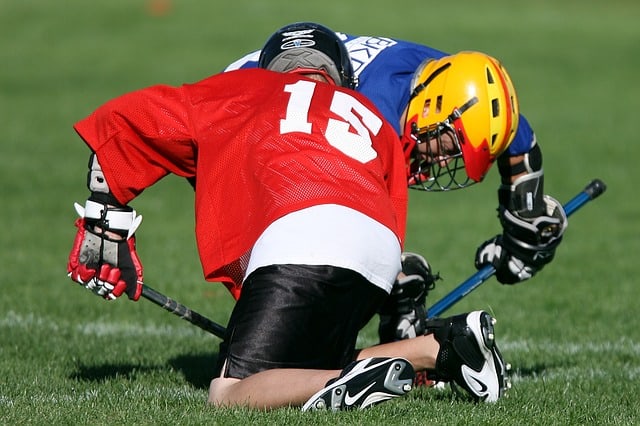 If you know the bare bones of the sport, you probably know that it has a Native American origin story. More specifically, lacrosse was first played by the Algonquians and the Powhatans. The two founding tribes were prevalent in and around eastern Virginia, where European settlers first arrived in their efforts for colonization.

Given that fact, it makes sense that they were the first seen playing lacrosse. It’s also why we associate them with the game even though there could definitely have been other tribes who played first. However, original lacrosse and the lacrosse we know today are not as similar as they might seem.

The game involved a stick and a ball if you couldn’t guess. The sticks evolved as the game grew in popularity, going from simple tree branch mechanisms to more complex instruments made from bones, deer sinew, and fishing nets.

The balls had their share of evolution, too. Originally, they were just wooden balls. However, they became balls of sticks and fur, wrapped in deer hide to keep them together.

The original rules of lacrosse and the rules today actually aren’t terribly different. Players may not touch the ball with their hands. However, lacrosse players today have boundaries they need to stay inside, unlike the original version.

Though not technically a rule, the warm-ups for lacrosse were also different Today, players jog around and do exercises before a game. However, that was not always the case.

The players had a celebration the night before the game, complete with dancing and food that was thought to help them win. All in all, the sport was more focused on the community aspect rather than the logistics and best ways of winning.

What is lacrosse about today for the most part? Winning and following the rules, like a lot of sports have become.

What is lacrosse today that it used to be? It’s a great way to build leadership skills; it takes a good leader to win.

The cultural role of lacrosse in Native American traditions

Lacrosse brought people together. People used it as an act of communion, allowing them to play and have fun while exercising. In fact, the crowded games allowed a wide range of players to participate.

Though the game is recreational, it is also great to tone its participants, making them more apt for the hardships of hunting and gathering. Gaining the ability to chuck a ball was training for things like throwing spears or knives.

Players painted their faces and bodies with charcoal. That would help to differentiate between the teams, which would otherwise be too large and confusing to keep track of. Overall, lacrosse was a symbol of union, a symbol of joy, and it has remained that way.

Lacrosse in the Modern World

Lacrosse in the modern world differs from lacrosse in the old world. The sticks are more advanced, the balls are made of a different material. In today’s lacrosse, especially for women, referees won’t let you play without proper gear, and they are enforcing safety rules with an iron fist.

Lacrosse underwent name changes, rule changes, and societal changes. However, something that still hasn’t changed is the fact that lacrosse still brings people together. People connect over their love for the sport and form lifetime bonds while they play together.

The modern benefits of lacrosse

Besides being an extremely physical sport that will help to keep you healthy, lacrosse has several different benefits. When you’re trying to choose a sport to play, lacrosse should not be overlooked.

Colleges give out tons of sports scholarships. When you think of them, you may not necessarily think “lacrosse.” You probably think about football, because everybody thinks about football.

In reality, it’s sports like lacrosse or rowing that are in demand with colleges. The sports that students overlook because they’re not as common are the sports with fewer team members. Fewer team members mean more open spots, which could translate to lower tuition.

Another benefit is the extreme amount of self-control lacrosse takes to play. What is lacrosse? A sport that looks like it should be extremely violent, but it just…isn’t. 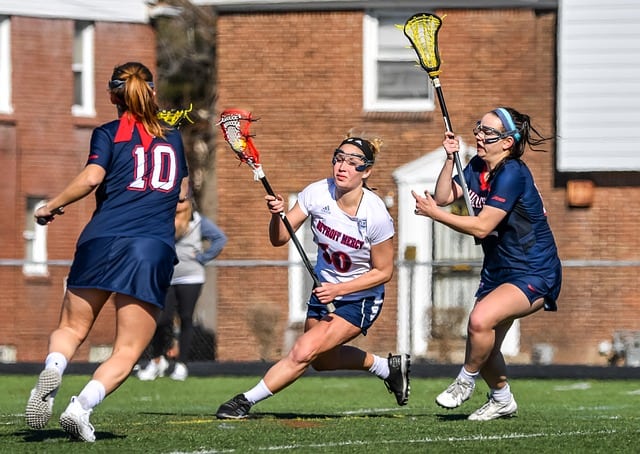 Lacrosse still uses a stick and a ball. However, now, there are specific guidelines the players have to follow, such as safety and boundaries as far as gameplay. Lacrosse today is done in teams of no more than nine, while there was no limit in the game’s original version.

Today’s version of the sport is also able to be played indoors. Often times, you’ll see lacrosse players joining teams year-round, even though the game is technically a spring sport. That helps them stay in shape and capable of performing well in the spring season. 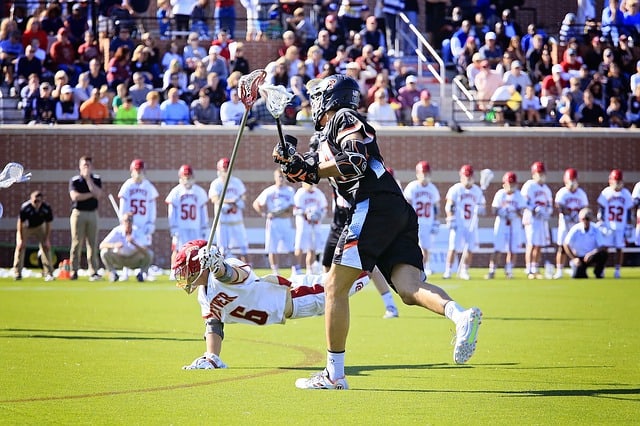 Lacrosse has had its fair share of influences on pop culture. Everyone knows “Mean Girls.” At the end of the movie, when Regina George decides to start disposing of her anger in a healthy way, what does she play? Lacrosse.

Granted, the game Regina plays is absolutely not what real lacrosse is like; that level of violence in a girls’ lacrosse league is unheard of. If she tried that in real life, she’d be dismissed from the team.

Lacrosse is also compared to Quidditch — the fictional game played by Harry Potter. The resemblance is definitely there; there are sticks, and some type of ball, and goals. However, if you call a Quidditch player a lacrosse player, do not be surprised when you get throat-punched by a superfan.

A Game of Sticks

Lacrosse is a timeless game. It’s an amazing way to release aggression and form friendships, and it has some practical benefits, too. Colleges don’t take sports lightly.

Remembering the game’s origins is important, and yet, it is so often forgotten. The times of old-school stickball seem so far gone, and they definitely are, but what is lacrosse without stickball? It’s nonexistent.

What is lacrosse? It’s yet another sport that has become so widely loved by the American public, especially. It is a sport that has ended up slowly losing touch with its heritage.

What is lacrosse to you? Have you ever played? Let us know in the comments! 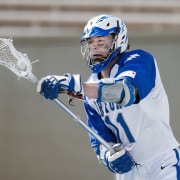 How to Play Lacrosse: What You Need to Know to Get Started 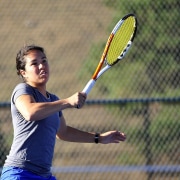 How to Serve in Tennis: Instruction for a Better Serve 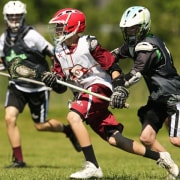 Hit the Court with the 8 Best Racquetball Shoes