If you are int he market for the best inflatable kayaks, look no further. Kayaking can be a fun hobby and a great adventure. The breeze blowing through your hair, the sound of the water flowing beneath the vessel and the birds flying off in the distance. There’s nothing better than a relaxing summer day floating down the river in a kayak.

If this sounds inviting to you then come along with us inside of some of the best inflatable kayaks that money can buy.

Although a kayak and a canoe might look similar, they are two different kinds of boats. While they’re both lightweight and they’re both propelled with paddles, they do have their differences.

A canoe is considered more of the pickup truck of boats. It will carry more people and supplies than a kayak, sits higher on the water, and it usually has an open deck. Its passengers can sit on a seat or on their knees and the paddle is single sided.

A kayak is considered the sports car of boats. Generally, a kayak will only carry one or two people, it sits just above the water, and the deck is usually closed. The passengers in a kayak usually sit inside covering their legs and the paddle is double sided.

Both the kayak and the canoe can be used for recreation and sports, but the kayak is designed to withstand some of the rougher water sports.

The number represents a number of people that the boat will hold, for example, K1 means that it’s a one-person kayak.

When you’re ready to set out for a day on the water you will want to be sure to have the perfect kayak for the perfect adventure.

You need to first consider how you will haul your kayak to the lake. Do you have a truck, SUV, or a trailer? What size kayak do you want? What kind of water will you be floating on and will it be for leisure or a sport?

Another option to the hard-shell kayak is the inflatable kayak. This type of kayak is perfect for a number of reasons. It will work great for traveling in a car; it’s easy to carry to the water; inflates in minutes; floats perfectly on smooth water.

List of the 5 Best Inflatable Kayak Options for You 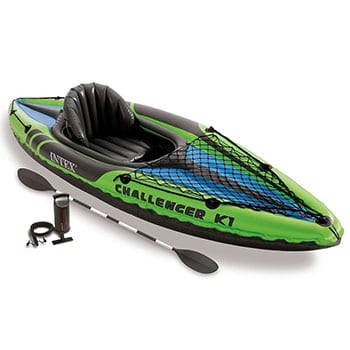 This one person durable kayak is constructed with a rubber material that will bounce off the sides of rocks and logs without a problem.

It’s equipped with a removable rudder, a grab line on both ends of the kayak, a convenient cargo net, and the comfortable inflatable seat even has a back rest.

This incredible kayak is complete with an aluminum oar, a repair patch, a manual hand pump, a great rating, and an excellent price.

This one should definitely be at the top of your list! 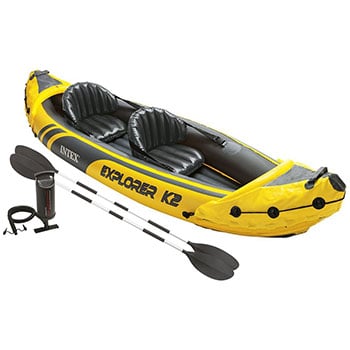 This two people durable kayak is constructed with a rubber material that is designed for smaller bodies of water.

Float down the lake and hop out for a swim with no worries because this one won’t flip when you get back in!

The bright yellow color makes for better visibility and the removable skeg will help with directional stability.

Anyone will be comfortable in this kayak with the adjustable inflatable seats and it can hold up to 250 pounds.

Intex generously includes two paddles that will break down into three pieces for easy storage, two inflatable seats that attach to the bottom with Velcro, one fin for the bottom to help with steering, one double action pump, and one kit bag.

Enjoy a smooth ride on the water with this inflatable kayak. 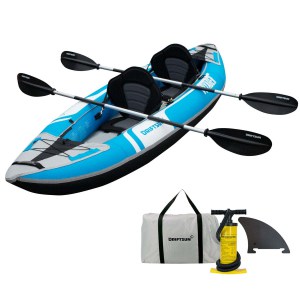 This inflatable kayak has all the benefits and features you need to enjoy a chilled or adventure-fulfilled day in the water. It’s designed to be durable thanks to the heavy-duty PVC material that provides the ultimate protection from punctures and accidental tears. Driftsun also guarantees that it won’t leak as it’s coated with a nylon oxford fabric on the top cover to prevent any damages.

For excellent performance and durability, it’s impressive that this product is lightweight and portable to carry around with you. Weighing only 271lbs in total, it’ll only require one or two of you to transport it to your desired location. Measuring 26” x 16” x 8”, this kayak is the ideal size for most adults to comfortably fit inside for an exciting day while suitably fitting inside a carry bag with no difficulties.

If you’ve previously owned kayaks, it’s likely you’ve encountered poor-quality designs. Fortunately, Driftsun worked hard designing a product that remains calmly afloat – even in choppy waters. You can also remove the deep fun to improve your tracking reliability, and the rear drain plug offers easy and quick cleaning and water draining at the end of the day. While you’re cruising along inside the kayak, sit comfortably on the high-back support chair, which promises not to cause any discomfort during your travels. The padded seating also works wonders for anyone with back problems.

We understand that when you’re eager to get on with your day and into the water, you need a kayak that inflates quickly. As a result, the Driftsun kayak is perfect for busy people who want to be in the water within five minutes. This short period is all thanks to the deluxe high-flow double-action hand pump that comes included with your purchase. 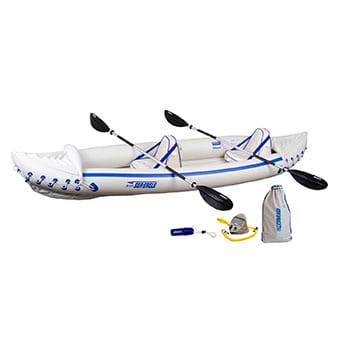 This durable kayak is constructed with PVC material and is made to carry up to three people.

The amazing Sea Eagle will inflate to 12’6” x 34” inches in approximately eight minutes. Just imagine how fast you can be on the water with this one!

It’s both sun and saltwater safe and it will hold up to 650 pounds. 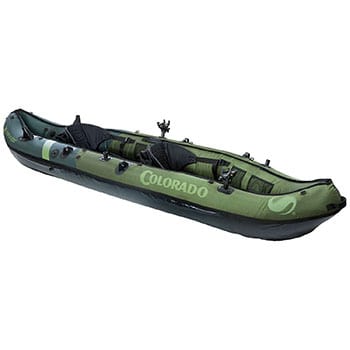 This is the best inflatable kayak if you have fishing on your mind.

Made of a polyethylene 18-gauge PVC construction, this one is designed for rugged use on the lake; the multiple air chambers will allow the other chambers to stay inflated if one gets punctured.

The best feature to this kayak is the expandable trolling motor fittings for your motor.

It’s guaranteed not to leak and the adjustable rod holders are in place to free up your hands while you’re trolling.

Keep your paddles out of the way by securing them to the holders that are provided on the sides.

You will have to purchase your paddles and your pump separately if you choose this one, but that shouldn’t put a damper on your decision considering everything else it has to offer.

Now that we’ve provided you with these choices, you should be on your way to the great outdoors in no time! Know somebody that loves to kayak like you? Check out these great gifts for kayakers.